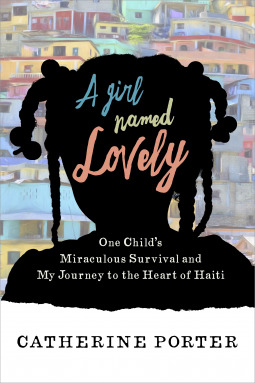 An insightful and uplifting memoir about a young Haitian girl in post-earthquake Haiti, and the profound, life-changing effect she had on one journalist’s life.

In January 2010, a devastating earthquake struck Haiti, killing hundreds of thousands of people and paralyzing the country. Catherine Porter, a newly minted international reporter, was on the ground in the immediate aftermath. Moments after she arrived in Haiti, Catherine found her first story. A ragtag group of volunteers told her about a “miracle child”—a two-year-old girl who had survived six days under the rubble and emerged virtually unscathed.

Catherine found the girl the next day. Her family was a mystery; her future uncertain. Her name was Lovely. She seemed a symbol of Haiti—both hopeful and despairing.

When Catherine learned that Lovely had been reunited with her family, she did what any journalist would do and followed the story. The cardinal rule of journalism is to remain objective and not become personally involved in the stories you report. But Catherine broke that rule on the last day of her second trip to Haiti. That day, Catherine made the simple decision to enroll Lovely in school and to pay for it with money she and her readers donated.

Over the next five years, Catherine would visit Lovely and her family seventeen times, while also reporting on the country’s struggles to harness the rush of international aid. Each trip, Catherine’s relationship with Lovely and her family became more involved and more complicated. Trying to balance her instincts as a mother and a journalist, and increasingly conscious of the costs involved, Catherine found herself struggling to align her worldview with the realities of Haiti after the earthquake. Although her dual roles as donor and journalist were constantly at odds, as one piled up expectations and the other documented failures, a third role had emerged and quietly become the most important: that of a friend.

A Girl Named Lovely is about the reverberations of a single decision—in Lovely’s life and in Catherine’s. It recounts a journalist’s voyage into the poorest country in the Western Hemisphere, hit by the greatest natural disaster in modern history, and the fraught, messy realities of international aid. It is about hope, kindness, heartbreak, and the modest but meaningful difference one person can make.

Over the years I’ve read a few stories written by journalists who’ve witnessed first-hand the devastating effects a natural disaster can have, especially on the one investigating and reporting on the incident.  Journalists are taught to remain objective, but Catherine Porter couldn’t.

This story of a little girl’s survival during an earthquake that killed thousands of people of Haiti is truly remarkable but not as endearing as the relationship, sacrifice and determination portrayed through Catherine Porter’s actions to help.  There are reverberations of single decisions all the time, however, the decision made by Porter sent aftershocks of hope for one family of a little girl deemed a miracle.