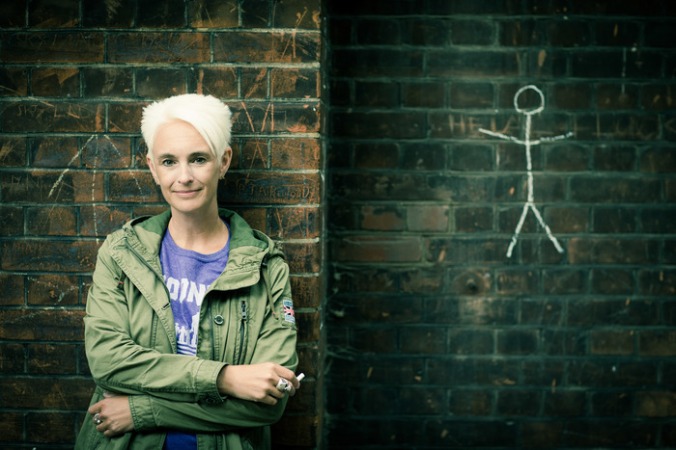 I can’t tell you how lucky I feel interviewing this lovely woman.  Her amazing talent shines through in her debut book, “The Chalkman.” Grab a coffee/tea or whatever your choice beverage is at the moment and prepare yourself for a great interview with C.J. Tudor, author extraordinaire!

Q. Hello, C.J.!  First let me tell you that you write like a master!  I noticed from your bio that you’ve done editing work before. What inspired you to take the plunge from editing to writing?  Why this genre? Were you always a fan of mystery suspense books?

Thank you so much!! Actually, I worked as a copywriter for an advertising agency years ago and I was working as a dog-walker when I wrote The Chalk Man! But I’ve always loved mysteries and horror – and The Chalk Man combines both.

Q. When you were writing the characters in The Chalk Man, were you writing them based on someone you knew? If not, how did you come up with this motley crew?  I absolutely loved the Protagonist.  Eddie seemed like a lot of young boys a person would run into before the incident in the park.  After wards, he changed.  Were you trying to connect the incident in the park with the bully to how he inevitably became later on in life? Was there a reason you did it this way?  I can’t help but think there was a tie-in to this fragile moment in the book and the final conclusion? Can you share your thoughts on this without giving too much away?

It’s funny – sometimes you have no idea where characters come from. They seem to just drop onto the page fully formed! Eddie’s voice was incredibly strong right from the start, like he’d always been hiding somewhere in my brain!

I think many things happen to change and unbalance him over that summer, the bullying being just one of them. Perhaps they all combine to work towards the conclusion!

Q.  I couldn’t help but feel an ominous shiver at the end of the book (well done!), do you think there will be a sequel, or should we just guess about the dark path ahead for Eddie?

I think Eddie’s story is done. I don’t think it would be kind to rejoin him!

Q.  Getting away from potential spoilers… this is your first book and you came out fighting! I love your author’s voice and how you wove a spell around Eddie and his friends and their precarious friendships.  Did you have similar friendships growing up?

Thank you! I did have a similar group of friends. We were all girls – but real tomboys. We used to do the same sort of things as Eddie and his gang – ride our bikes around town, hang out in the playground, build dens in the woods. I still see the friends I grew up with and we often reminisce! Although we didn’t have the same dramatic fall-outs and, of course, we never found a body in the woods!

lol I hope not!

Q.  In the beginning I was thinking, Goonies! Then, it switched to Stand By Me, then THAT didn’t work out lol. Thank goodness! Although I love both, I wanted to see a fresh voice! And you delivered! I truly believe you nailed a tiny undiscovered niche with The Chalk Man.  Do you agree? Or, did you see twinkles of the aforementioned feelers or others as you began to write your story too?

I read a lot of Stephen King when I was about Eddie’s age and he’s always been a big influence. And I completely understand the comparisons to The Goonies (which I love) and Stand by Me (also a big fan). However, they weren’t in my head when I was writing The Chalk Man.

The idea came from a tub of coloured chalks a friend bought for my daughter’s second birthday. We spent the afternoon drawing stick figures all over the driveway. Then we went inside and forgot about them. Later that night, I opened the back door and was confronted by these weird chalk drawings everywhere. In the darkness, they looked incredibly sinister. I called out to my partner:  “These chalk men look really creepy in the dark. . .”

Very quickly I had the idea of a childhood game that turns sinister and the rest flowed from there!

Q. Being a debut author is a tough road. What part of the writing process did you struggle with the most? IE. The querying, synopsis, etc., or did you have a foot in the door?

It is tough! I was trying to get somewhere for over ten years before I wrote The Chalk Man! I have a lot of unfinished projects and rejections behind me! I don’t have any publishing experience or contacts, no foot in the door. I submitted to agents and I was lucky enough that one of them – Madeleine Milburn – saw the potential and plucked the ms (manuscript) from the slush pile. A good agent is everything. Six months later I had a publishing deal!

Q. As a female author, did you have a hard time writing Eddie? How about any of the other boys? There’s a bully in the story. Have you had any personal experiences with bullies?  Do you have any good advice on how to handle a bully for readers?  I understand the importance of this bully and what he did to the Protagonist. Is there a hidden warning you’re hinting at as it pertains to bullying?

I’ve always been a bit of a tomboy so I found writing Eddie easy – I’d probably struggle more with a very girly female character! I think most people have had some experience of bullying in their life. Children and teens live in an odd parallel world. They can’t always talk to adults about what’s going on. Plus, telling someone can sometimes make the problem worse and invite retribution from the bullies. School can be a horrible time for a lot of children. I wasn’t badly bullied at school but I wasn’t one of the popular children either. Fortunately, I had my own small group of friends (like Eddie) so we supported each other.

Q.  When you write, are you a ‘by the seat of your pants’ gal or do you plot out your story, use storyboards, a special program??

Definitely a pantster. If I plotted or planned I’d be bored before I started – and then I’d change it all anyway. I like the journey, seeing where the story takes me. It keeps it interesting.

Q.  The parents in this story seem very preoccupied with their own lives and I understand why you wrote them this way.  Do you think this is indicative of today’s families? Or, just those in 1986?

When I was a child – in the 70’s and 80’s – families weren’t so kid-centric. You were expected to fit in with your parents’ lives rather than vice versa. Today, parents focus much more on their children – I suppose this can be good and bad!!

Q. Do you think Eddie was emotionally stunted from the things that were happening in his life? Or, would you considered him conflicted? Torn?

I would say more conflicted than stunted. But he’s very much a prisoner of his past. He hasn’t really moved on from what happened – quite literally because he still lives in the same house and small town where he grew up.

Q.  Okay, an easy one. From what I read in your novel, I have to ask.  Are you a dog lover or a cat lover?  I know you were a dog walker, but the cat in the story…. Eeeesh!  Something so minor actually gave me the creeps when I read it.  Was that the sole purpose of the cat?

The scene with Mittens the cat is supposed to be creepy. It also serves as a good piece of misdirection. I love all animals but I‘m more of a dog person. I’ve heard too many tales from my cat-owning friends about waking up to the bloody, eviscerated bodies of mice and birds. I couldn’t deal with that!

Q.  Do you believe in Karma? Has there ever been an incident that supports your thoughts on this.  I know there’s plenty in The Chalk Man, but I don’t want you to give any spoilers lol.  Have you had a personal experience with Karma that you can share?

I believe in kindness. Good Karma. If you treat people well, it will pay back eventually. More to the point – it’s nice to be kind.

Q.  I felt the end results of the one adult figure (Mr. Halloran) in The Chalk Man that played a significant part in Eddie’s character development was extraordinarily written.  In fact, many significant parts involving this character were very well written and wrapped up nicely…  This particular adult seemed a bit elusive, somewhat of an enigma. Is this what you wanted to do? Or, am I way off on this account?

I’m glad you enjoyed the parts with Mr Halloran and Eddie. I think Mr Halloran is supposed to be a little elusive. He’s used to people treating him differently because of how he looks so he keeps himself slightly apart. Eddie is a bit of an outsider too. That’s what draws them together as much as the accident at the fair or the bullying. Plus, they share secrets!

Q.  Is there another project in the works, or, are you planning to promote The Chalk Man first, before writing another novel?

I’ve finished Book 2 and I’m working on Book 3. Book 2 is another dark, creepy thriller set in a former mining village in the north of England. When Joe Thorne was fifteen, his little sister, Annie, disappeared. And then she came back. Twenty-five years later, an eleven-year-old boy is bludgeoned to death by his own mother in the same village. Joe returns, to work as a teacher at the failing school, but also to find answers. However, coming back to the place where he grew up means facing the people he grew up with, the things they did . . . and what they found!

Q.  If you could choose another genre to write in, what would it be?  Why?  Have you ever considered a series?

Hmmm – I can’t imagine writing anything that isn’t dark and creepy. I wouldn’t rule out a series in the future but the books I have planned are all stand alone. I like the freedom that a stand alone book offers you. You get to play with a completely new cast of characters each time! You’re not limited by anything!

Q. I can see The Chalk Man as a movie, can you?  If it were to become a movie, who would you like to see play Eddie as a boy and Eddie as a man?  Who do you think would do a great job playing Mr. Halloran? And the rest?

Well, it would be amazing if it ever became a movie. But I’d be rubbish at casting. Plus, I don’t like naming actors. I’d rather people form their own images of the characters in their heads!

So that wraps up my interview with C.J. Tudor, author of The Chalk Man, and I hope you enjoyed meeting the author behind the work!

Check out my other author interviews here!