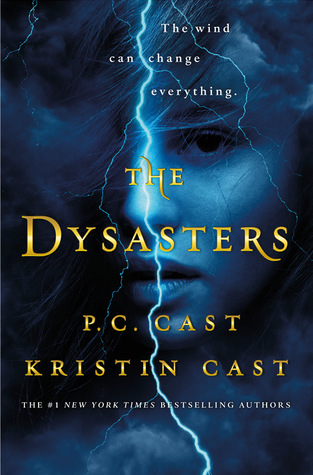 Foster Stewart knows she’s different. Her life has never been “normal.” Talking to plants and controlling cloud formations aren’t things most seventeen year olds are into. Tate “Nighthawk” Taylor is perfect. Star quarterback and all around dreamy boy next door he never thought about his “extra” abilities. What quarterback wouldn’t want night vision? That’s not weird, right? It’s cool!

But on the night of their first meeting a deadly tornado brings them together and awakens their true abilities – the power to control the element air. Unbeknown to Tate and Foster, they are the first in a group of teens that were genetically manipulated before birth to bond with the elements. Which truly sucks for Foster, as she has to face the fact that Dr. Rick Stewart, her beloved scientist father, betrayed her and now wants to use her and the others for his own nefarious world domination plot.

Foster and Tate must stop Dr. Stewart and his minions before he destroys their lives and the world.

First thing I found surprising? There are pictures to compliment the story.  But this is a Young Adult book and if there are illustrations, then the book is usually a graphic novel. Even with a quick flip through, one can see that this is not a graphic novel, in the traditional sense. So this is a cross-genre of sorts? The pictures are graphic novel styled, black and white and inserted into the writing throughout the book.  At first, I wasn’t sure if I liked them being in the book.  I found the writing almost graphic novel styled too, mostly dialogue-driven.

If I were to categorize this book, I think I’d place it more in the younger teen genre because of the simplicity of the writing.  I completely understand how frustrating it is to have a story that can go in many directions, so it’s difficult to market properly, but we are also at a time where authors can cross-genre their books and be widely accepted by their readership. Whether or not this happens more and more relies on one fact. There is one remaining roadblock to overcome–the publisher.

The premise was enticing.  Elemental powers… who wouldn’t love that? The writing seemed choppy in places and fragmented.  It wasn’t always smooth and enticing but often jumped and zagged and jerked about.

So I suppose at this point I have to ask, would the book have done better as a properly formatted graphic novel? Would more pictures have helped the plot move smoothly?  Let’s take a look at something else I’ve stumbled upon.

I’ve come across a book where two authors co-wrote the story before. Not something unheard of right?

I recently had the pleasure of interviewing Rachel Caine and Ann Aguirre who wrote/are writing the new fantasy YA series: “Honor Among Thieves.”  I remember asking if having two authors in different locations made the writing tricky.  I remember both authors seemed to have no issues with this. Each would write a section following the previous written by the other writer.  The results speak for themselves.  “Honor Among Thieves” is a fantastic series, and I recommend it to all.  So looking deeper, could the issue be the relationship between co-writers? Rachel Caine and Ann Aguirre obviously compliment each other as writers, so their author voices and styles are very similar, so, working together is a great meeting of the minds.

Now, P.C. Cast and Kristin Cast do write well as individuals… but together? Is that the problem? Do we have two writers so different in their author voices and styles that their differences betray them on paper? Maybe that is part of the problem but not the entire issue I’m sure. However, if you put all that we’ve discussed together, maybe that is where the answer lies.

Graphic novel writing is something that should be left to those who have a complete understanding of storyboards, graphic writing, plotting novels that rely heavily on artwork… There is also a style needed by the writer that is different from what is needed by a fictional novel writer to make the novel of artwork successful. Perhaps, there is something to this when looking at these two authors.  Do they both have equal experience with writing graphic novels? Nevermind that, do they both have experience writing Chapter books? Why Chapter books? Well, in the ‘typical’ novel writing industry Chapter books are the last children’s reading level to have illustrations. However, we are no longer writing in a “typical” era of publications. Basically, if you can sell it, you can write it.  So a young adult book with illustrations… Why not?  Publishers will love anything different if there’s a chance of huge sales, large royalties and a case for mass marketing potential.

So why isn’t this book doing better with reviews? Well, let’s put all the aforementioned together with one other thing… character development. There are rules for character development within a story, or should I say “typical” rules for this. Normally, there’s a main character that has goals that have to be reached by the end of the novel. Secondary characters to the ‘Protagonist’–the main character, help the Protagonist by propelling him/her toward achieving their goals. Everyone has a job. The Antagonist or ‘villain’ of the story is against the Protagonist and does everything in his/her power to stop the Protagonist from achieving his/her goals. The Antagonist’s secondary characters basically do their best to help the Antagonist along.  So there is a basic formula for writing characters in your story.

This too has gone from “typical” to “atypical.”

Now, some novels have more than one Protagonist. Chapters are now used, switched back and forth from one main characters point of view to another’s. For example, chapter one may be told from the perspective of Jane, but chapter two is told from John’s. Chapter three is from Frank’s, and four is written from Mary’s.  I haven’t decided if I like this new way of dealing with multiple points of view perspectives.

This particular novel is written in the third point of view.  Would it have benefited more, since it is already breaking traditional formatting, to write from this switching first-person perspective? Head-spinning and confused yet? Ya, me too.

So besides using a strange third-person perspective with multiple protagonists, using illustrations in a young adult genre which is not usually done, there is one other issue that may be the culprit for the low reviews… Nasty, unlikeable protagonists.

You don’t have to like the characters in a book but it could help. Since there’s no real rule that the MC has to be likable, I always believed that if he/she isn’t likable, then there has to be a reason shown, otherwise make him/her the antagonist or the antagonist’s secondary character.  Again, this normal approach to character development has been challenged over and over again by a generation of readers where bad is great, and writing unlikable MCs are something agents and publishers are hotly seeking right now.  Why? I have no idea.  Perhaps, they’re searching for that something “new” when almost everything has already been done.

I guess in the long run, this book is as good as the marketing shows which will largely be based on a small group of supporters that like to read atypical books.  Unfortunately, I believe this thought process could result in the authors boxing themselves into a corner of restricted interest by relying on a smaller demographic for success. Somehow, the marketing of this book will have to somehow pull interest from those readers who don’t normally gravitate toward atypical books. And, therein lies the problem.

With publishing going in the direction it is, the authors’ platform, their following, the author’s marketing strategies and promotion of their own book is a must. This is where the argument of whether self-publishing or publishing traditionally comes into play. A discussion for another time.

Most often book signings and promotional items are the author’s financial responsibility unless you are lucky enough to get one of the Five Sisters (Five Largest Publishing Houses) interested in your book. It does ask the question, what’s left for the agents and publishers to do to earn the 15% they each demand? It’s not always the editing that they may or may not do since now many publishers want a near perfect sellable copy ready by the time you query an agent. If an author has to pay for an editor to fix their mistakes because editing may not be the author’s thing… an expense that could lead up to $800.00 or more, then once again, what is it that the agent and publisher do to earn their 15%?

So why would authors take the chance to mess up a deal or make more work for themselves by writing something so off the typical paths?  Good question. It’ll be interesting to see where this book’s success or lack of goes from here.

Myself, it was an interesting read. I read it in a day. I will be interested in hearing more from others and their opinions about the book as time passes. Time will show if readers accept the authors’ concept and style or shun it for its many complicated differences found under one cover.

I give them credit for being adventurous, but I’m exhausted just thinking about it.