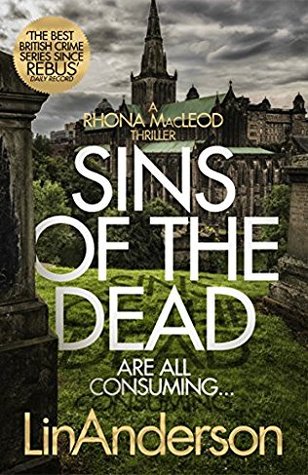 While illegally street racing in the underground tunnels of Glasgow, four Harley-Davidson riders make a horrifying discovery: a dead man left in the darkness, hands together on his chest as if peacefully laid to rest. The cause of death is unclear, the only clues being a half glass of red wine and a partially eaten chunk of bread by his side that echo the ancient religious practice of sin-eating. Called to the scene, forensic scientist Rhona MacLeod is perplexed by the lack of evidence. But when another body is found near her own flat, laid out in a similar manner, she fears a forensically aware killer stalks the city and is marking the victims with their unique signature. Even more worryingly, the killer appears to be using skills they may have learned while attending her forensic science lectures at Glasgow University.There are signs that Rhona is being targeted, that the killer is playing with her and the police, drawing them into a deadly race against time, before the sin-eater’s next victim is chosen . . .Sins of the Dead is the thrilling thirteenth book in Lin Anderson’s Rhona MacLeod series.

This is a bit of a different review for me.  There’s actually twelve books prior to this one in the Rhona MacLeod Thriller series, twelve that I haven’t read. So… why request a book for a series that I haven’t read? It’s simple actually. I was told how fantastic it is and how it can actually stand as a standalone. I thought, great! And here we are. Sadly, this was not really the case.

There were many references to past investigations and feelings toward some of the characters that I didn’t understand because I hadn’t read the series. However, with that said, Anderson does a fantastic job with police procedures and analytic investigations.  Her story is well-plotted with a strong edginess that keeps the reader turning pages.

What attracted me to the book was the premise. I’m a sucker for anything written like Agatha Christie mysteries. This was quite the read. There was a huge creepy factor that I loved and many twists and turns that had me foiled until the end.

Although there is that police mystery, you discover characters complex and full of conflicts that draws you into their personal struggles.  All her characters are layered and flawed and developed perfectly.

I enjoyed the reference to the ancient practice of “sin-eating.” The setting was very realistic and well-researched and I feel like I’ve learned something about Glasgow. Although my friend was off about the standalone issue, she was bang on about the enjoyment of this read.  I found it well-paced and detailed enough to make you feel like you were there experiencing everything right beside the MC. Loved it. Now, I’ll have to find book #1 to read and play catch up.

I gave this book a well-earned: