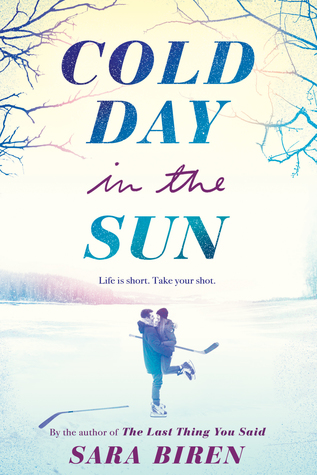 Holland Delviss wants to be known for her talent as a hockey player, not a hockey player who happens to be a girl. But when her school team is selected to be featured and televised as part of HockeyFest, her status as the only girl on the boys’ team makes her the lead story. Not everyone is thrilled with Holland’s new fame, but there’s one person who fiercely supports her, and it’s the last person she expects (and definitely the last person she should be falling for): her bossy team captain, Wes.

This genre is really not my usual read. However, there were elements in the premise that caught my eye, so I thought I’d give it a try.

Hockey… I’m Canadian, no brainer. Strong, female characters… another no brainer. Great sense of family and support… my family exactly, another no brainer.  So far three for three. There’s food and music interests–awesome, and unfortunate sexism and chauvinism elements… something I detest in real life and have experienced over and over again throughout my life.

The character development of the main character was what I loved the most. This character was the epitomy of strength, bravery, independence, self-esteem, and determination.  She was flawed just enough, however, I wish she could have been strong in all aspects of her life and maybe flawed in her game or attitude toward the game.