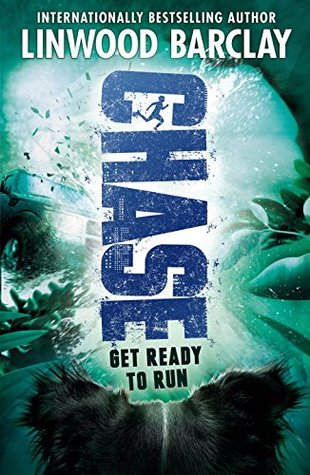 The first book of this “Chase” series, came out in July of 2017 and promised to keep young readers sitting on the edge of their seats. I read the first book when it first came out and decided I needed to re-read it before taking up the second of the series, “Escape” to review it.  Strangely, I found it incredibly difficult in acquiring the first book even through my local library; but, after several months of persevering, I finally found one and began re-reading it.

Now, I’m in a better position to review the second book.  I’ll begin by explaining who Linwood Barclay is for those unfamiliar with this author.

“Linwood Barclay is the #1 internationally bestselling author of seventeen novels for adults, including No Time for Goodbye, Trust Your Eyes and, most recently, A Noise Downstairs. He has also written two novels for children and screenplays.
Three of those seventeen novels comprise the epic Promise Falls trilogy: Broken Promise, Far From True, and The Twenty-Three. His two novels for children – Chase and Escape – star a computer-enhanced dog named Chipper who’s on the run from the evil organization that turned him into a super-pup.
Barclay’s 2011 thriller, The Accident, has been turned into the six-part television series L’Accident in France, and he adapted his novel Never Saw it Coming for the movie, directed by Gail Harvey and starring Eric Roberts and Emily Hampshire. Several of his other books either have been, or still are, in development for TV and film.
After spending his formative years helping run a cottage resort and trailer park after his father died when he was 16, Barclay got his first newspaper job at the Peterborough Examiner, a small Ontario daily. In 1981, he joined the Toronto Star, Canada’s largest circulation newspaper.
He held such positions as assistant city editor, chief copy editor, news editor, and Life section editor, before becoming the paper’s humour columnist in 1993. He was one of the paper’s most popular columnists before retiring from the position in 2008 to work exclusively on books.
In 2004, he launched his mystery series about an anxiety-ridden, know-it-all, pain-in-the-butt father by the name of Zack Walker. Bad Move, the first book, was followed by three more Zack Walker thrillers: Bad Guys, Lone Wolf, and Stone Rain. (The last two were published in the UK under the titles Bad Luck and Bad News.)
His first standalone thriller, No Time for Goodbye, was published in 2007 to critical acclaim and great international success. The following year, it was a Richard and Judy Summer Read selection in the UK, and did seven straight weeks at #1 on the UK bestseller list, and finished 2008 as the top selling novel of the year there. The book has since been sold around the world and been translated into nearly thirty languages.
Barclay was born in the United States but moved to Canada just before turning four years old when his father, a commercial artist whose illustrations of cars appeared in Life, Look and Saturday Evening Post (before photography took over), accepted a position with an advertising agency north of the border. Barclay, who graduated with an English literature degree from Trent University, in Peterborough, Ontario, was fortunate to have some very fine mentors; in particular, the celebrated Canadian author Margaret Laurence, whom Linwood first met when she served as writer-in-residence at Trent, and Kenneth Millar, who, under the name Ross Macdonald, wrote the acclaimed series of mystery novels featuring detective Lew Archer. It was at Trent that he met Neetha, the woman who would become his wife. They have two grown children, Spencer and Paige.”

I think it’s safe to say that this author knows a bit about writing. 🙂

Chipper is a very special dog. He’s part of a multi-million dollar experiment at a secret organization known only as The Institute. The Institute has been experimenting with dogs, melding them with state-of-the-art computer technology. But there’s a problem with Chipper. His natural dog instincts often overrule his computer side. No matter what he’s doing, if he sees a squirrel or a mouse, he’ll drop everything to chase it. So The Institute has decided it’s time to pull the plug on Chipper. Chipper manages a daring escape with a destination in mind, but a team from the Institute, led by the cold-hearted Daggert, is hot on his heels.

Twelve-year-old Jeff Conroy lives with his aunt and helps run her business, a lakeside cabin-rental operation that caters to fishermen. Jeff desperately misses his parents, who were killed in a plane crash a year earlier. But at least he’s made one friend: Emily, whose ex-cop father owns a similar business down the lake. And Emily, a computer whiz, has the coolest fort ever: a trackless, abandoned train station in the middle of the forest.

After eluding his would-be captors, Chipper boards a bus and ends up in the country, only to be hit by a truck that Jeff is driving (underage). Jeff takes Chipper to the train station to nurse him back to health, and it’s here that he and Emily discover a computer port in Chipper’s collar, and once Emily hooks her laptop to it, she and Jeff discovers that Chipper’s arrival is not random. He has been looking for Jeff — and now so is Daggert …

Don’t stop running . . . the second edge-of-your-seat thriller with bite from international bestselling author Linwood Barclay for ages 9+
12-year-old Jeff and genetically-engineered spy dog Chipper are on the run from the mysterious and sinister government organization knows only as The Institute. Due to a combination of bravery, luck and some of Chipper’s more useful modifications, they’ve managed to evade their pursuers so far.
But The Institute is closing in and is Chipper and Jeff will have to be stay one step ahead if they want to stay alive..
Danger, secrets and thrilling suspense collide in Linwood Barclay’s action-packed series for children.
Out April 2018

Middle-grade thrillers are difficult to take on, especially because of the target audience.  However, Barclay does an excellent job. Although an adult might say “Escape” moved slowly and seemed a bit dull, I doubt that any child would agree.  I think this series would be a great read for any lad around the age of ten, but would probably appeal to any girl the same age that likes animal stories.

The action and suspense picks up in the second book, after the first book finished on a cliff-hanger.  The series is building in tension and drawing quickly toward a thrilling resolution.  Book three promises to be even more intense.

Characters are developed perfectly with the setting edged with science fiction overlays.  Plot is building in conflict and tension, twists and turns keeping the reader invested in the story. Where book one laid out the story, introduced characters, and brought the conflict to the forefront, book two carries all to the next stage and builds suspense, thrills and action along the way.  You’ll be rooting for boy and dog and friends and want to know what happens next in the continued series.

Check out the author’s site here!

He’s a wonderful author of both children and adult books with a new adult release “A Noise Downstairs” being his latest adult.

For “Escape” I gave him: