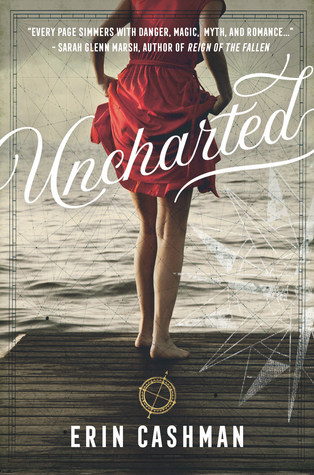 Seventeen-year-old Annabeth prefers the fantasy of her books and paintings to reality—because in reality, her mom is dead, and it was all her fault. When she accompanies her father to the funeral of some family friends who drowned, she’s surprised to find her grief reflected in the face of Griffin Bradford, the son of the couple who died. Griffin is nothing like the carefree boy she once knew. Now he’s irritable, removed, and he’s under police investigation for his parents’ deaths.

One night following the memorial service, Annabeth’s dad goes missing in the woods, and she suspects Griffin knows more about the disappearance than he’s letting on. He refuses to answer her questions, particularly those related to the mysterious “expedition” his parents took to Ireland, where they went missing for seven months.

Annabeth fears her father isn’t lost, but rather a victim of something sinister. She launches her own investigation, tracing clues that whisper of myth and legend and death, until she stumbles upon a secret. One that some would die to protect, others would kill to expose—and which twists Annabeth’s fantasy and reality together in deadly new ways.

Legend and reality blend into a mysterious story of deep, dark secrets. How can you NOT love that?

I so enjoyed the plot with all its twists and turns, and how it flowed smoothly and fast, causing me to turn the pages and finish the novel in one sitting. Buy it! Read it! You won’t be disappointed.