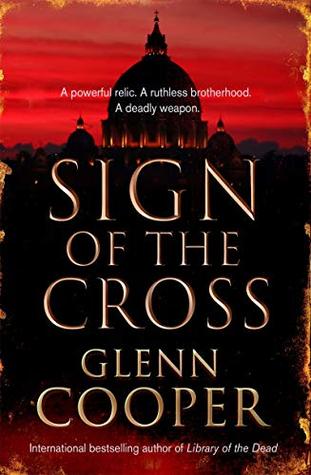 Abruzzo, Italy: a young priest suffers the stigmata of the crucifixion.

The Vatican, Rome: the Pope calls on Harvard professor Cal Donovan to investigate the truth of the priest’s claim.

Berlin, Germany: a neo-Nazi organisation believes the priest is the key to an earth-shattering secret. A secret that can be used as a deadly weapon.

When the priest is abducted, a perilous race against the clock begins. Only Cal can track down the ruthless organisation and stop it, before an apocalyptic catastrophe is unleashed.

First time I read the premise for this book, I thought, “Da Vinci Code/Dan Brown.”

When I began reading the book I kept finding myself feeling like the author was just a bit too afraid to let us see the complete Protagonist, never whole, never complete. It was a bit frustrating not being allowed into the Protagonist’s full character, into his head to see what really is ticking there and I can’t help but wonder if it was written this way because the author wanted to keep those things just out of reach to continue building tension. Such a move is risky.

There is always that chance that the reader will become too frustrated and give up the book rather than hang in there until the end, which would be equally frustrating because you never really see the Protagonist in his complete form at the end. Is this a case of where the series seems to build and reveal character layers as it progresses book to book, and the only way to figure him out is to keep reading the series to find out more about him? Now, the big question is… will a reader want to invest such time and money just for a fictional character?

It’s quite the hope to have in order for a series to be successful.  All that time and money… What if after five books, seven books, twenty three books, the readers don’t get satisfaction for their following the series…wow! Not something I would do… I’m a chicken basically. 🙂

However, for Glenn Cooper, this isn’t his first rodeo. He’s been in the business of writing for a while now.

For a first book of a series, I think this book opens  new beginnings for the Protagonist and promises to grab as many readers as possible for the series’ serious trek ahead. Now, going back to my first sentence, that this series would appeal to readers of  Dan Brown. I wasn’t  kidding; this book is equal to if not better in some areas than Dan Brown’s series. If I was to invest in a new series, and of course since I love thrillers, I’d choose this one because I’m goofy enough to wait for more details about a promising Protagonist, details I may not get until book 39ish.