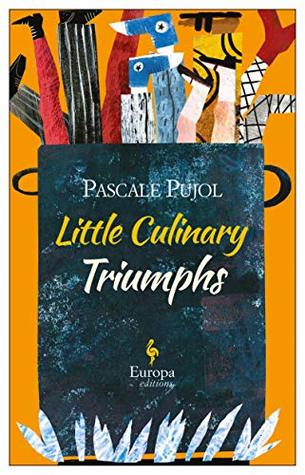 Set in the storied Parisian quarter of Montmarte, this heartwarming, comic tale is a must for foodies, Francophiles, and lovers of a good story well told.

Made famous by artists, writers, and bon vivants of every ilk, Montmartre has been the stomping ground for bohemian celebrities through the ages and a neighborhood synonymous with transgression and innovation. Today, it is a bustling multiethnic neighborhood where cultures, cuisines, the past and the future of Europe cohabitate and collide. Here in this vibrant community, in Pujol’s charming English-language debut, a cast of endearing characters fall into increasingly comic situations as they seek to follow their often-outrageous dreams.

Sandrine works as a functionary in an employment office, but there is a lot more to her than one might suspect from her job description. With a volcanic personality and an imagination to match it, she is also a world-class cook who is waiting for the right occasion to realize her dream of opening a restaurant of her own.

With a master plan that one could only describe as Machiavellian, Sandrine ropes Antoine, an unemployed professor looking for a fresh start, into her venture. A carousel of extravagant characters follows: the giant Senegalese man, Toussaint N’Diaye; the magical chef, Vairam; the extravagantly flatulent Alsatian, Schmutz and his twelve-year-old daughter Juliette—IQ 172!; the alluring psychologist and Kama Sutra specialist, Annabelle Villemin-Dubreuil.

Plans for the restaurant proceed smoothly until Sandrine discovers a shady newspaper operation next-door that leads her to a sinister magnate manipulating the Parisian news outlets.

So, this was not what I thought it would be. lol

With that said, I did find this translation piece funny, poetic and really off the charts. It’s a wild ride to the middle of nowhere and then BAM! Right between the eyes, it all comes together and actually makes sense.  The crazy antics of creative characters and their struggles really surprised me.

I was hooked right away and despite a few typos, the pace and plot moved along drawing the reader into the heads of the characters right away and not allowing them to escape until they were ready to sum everything up.  Then the reader has several aha moments and the story wraps up perfectly.

This book is one of those hidden gems a reader hopes to find.