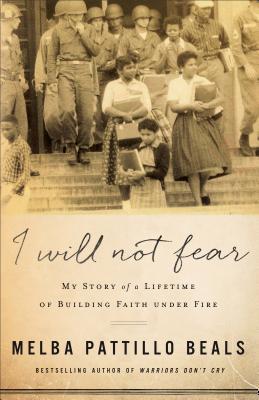 In 1957, Melba Beals was one of the nine African American students chosen to integrate Central High School in Little Rock, Arkansas. But her story of overcoming didn’t start–or end–there. While her white schoolmates were planning their senior prom, Melba was facing the business end of a double-barreled shotgun, being threatened with lynching by rope-carrying tormentors, and learning how to outrun white supremacists who were ready to kill her rather than sit beside her in a classroom. Only her faith in God sustained her during her darkest days and helped her become a civil rights warrior, an NBC television news reporter, a magazine writer, a professor, a wife, and a mother.

In I Will Not Fear, Beals takes readers on an unforgettable journey through terror, oppression, and persecution, highlighting the kind of faith needed to survive in a world full of heartbreak and anger. She shows how the deep faith we develop during our most difficult moments is the kind of faith that can change our families, our communities, and even the world. Encouraging and inspiring, Beals’s story offers readers hope that faith is the solution to the pervasive hopelessness of our current culture.

“Melba Pattillo Beals made history as a member of the Little Rock Nine, the nine African-American students involved in the desegregation of Little Rock Central High School in 1957. The world watched as they braved constant intimidation and threats from those who opposed desegregation of the formerly all-white high school. She later recounted this harrowing year in her book titled Warriors Don’t Cry: A Searing Memoir of the Battle to Desegregate Little Rock’s Central High School.

Melba Pattillo was born on December 7, 1941, in Little Rock (Pulaski County). Beals grew up surrounded by family members who knew the importance of an education. Her mother, Lois Marie Pattillo, PhD, was one of the first black graduates of the University of Arkansas (UA) in Fayetteville (Washington County) in 1954 and was a high school English teacher at the time of the crisis. Her father, Howell Pattillo, worked for the Missouri Pacific Railroad. She had one brother, Conrad, who served as a U.S. marshal in Little Rock, and they all lived with her grandmother, India Peyton.

While attending all-black Horace Mann High School in Little Rock, she knew her educational opportunities were not equal to her white counterparts’ opportunities at Central High. In response to this inequality, Pattillo volunteered to transfer to the all-white Central High School with eight other black students from Horace Mann and Dunbar Junior High School. The Little Rock Nine, as they came to be known, faced daily harassment from white students. Beals later recounted that the soldier assigned to protect her instructed her, “In order to get through this year, you will have to become a soldier. Never let your enemy know what you are feeling.” Beals took the soldier’s advice, and, while the rest of the school year remained turbulent, all but one student, Minnijean Brown, was able to finish the school year. Barred from entering Central High the next year when the city’s schools were closed, Pattillo moved to Santa Rosa, California, to live with a sponsoring family who were members of the National Association for the Advancement of Colored People (NAACP) for her senior year of high school.”

I can’t even begin to pretend to understand what Melba went through at the hands of racists and bullies! This had to be one of the very worse things a person can endure and survive.  In her memoir, Melba resists, fights and endures those around her determined to keep her down, and rises above them all both spiritually and physically.

I grew up with many black families living in our neighborhood and because my parents ran the local recreation department’s events (sports and fairs), our family was well-known in our community.  My mother grew up in Montreal, Canada during the 1950’s and remembers a lot of things that happened with integration there.  Although never as extreme as it was in the US, racism and anger toward integrating blacks into all-white schools still existed.

She told me of a story when she was a teen when her and her friends had decided to go to the beach.  In her circle of friends there were two young men who also happened to be black.

At the beach, she said that the white boys quickly took off their shirts and ran in to the water wearing trunks.  However, their black friends were not allowed to exercise the same privilege, but were forced to keep their clothes on because “no white person wants to see black skin,” and when they tried to get in to the water to cool off, other white adults on the beach told them that they were not allowed to swim in the same water used by whites.  These young men were also condemned for being with white females. Of course, they were among males and females who were white, but the fact that they dared to go near a white woman wearing a bathing suit (have you seen 1950’s bathing suits?), the white adults would have none of it.

My mother and her friends were older teens and never really cared what color their friends were, they all hung out and all had fun together as a group.  So when their two friends were getting grief from these racists, all of them left the water and came to their friends’ aid.  She told me that she thought they’d all come to blows, her included because she was at the front of the line (that’s my mother for ya) yelling her head off at the racist idiots.

It was a difficult and ugly time where many of the worse traits human beings are capable of exhibiting were on display.  By rallying around their friends, all remained to swim at the beach and the others… they were so overwhelmed by the attitude of the teens, and how others came to their defense too, that they left in fear of their own back seats.

I would love to meet Melba and ask her all sorts of questions.  I’d like her to meet my mom too ;). I bet they’d have lots to talk about. lol

The issue of faith is not the only subject discussed in this book. There’s a recounting of Dr. Pattillo’s life full of struggles, hardships, racism, sexism, and many endurance tests.   She let’s us in to see her perspectives on religion, God, marriage and those around her.

She knew of hardship and struggles early on in her life, their effects taking a large toll on who she saw as herself in the mirror. Her conflicted daily life was brutal and yet, she survived.

Racism and prejudice backed by hateful actions and jibes were a constant in her life and resulted in many cruel injustices committed against her. Only eight others were with her during this integration into an all white school. It had to be so incredibly difficult. But her perseverance won ground for the Civil Rights movement, paving the way for todays students of all nationalities and color.

Because of her strong faith in God and her unrelenting devotion to Him, Melba made it through this incredible part of her life-time filled with the worst of  experiences despite the battle with prejudice, gender inequality, and equal rights.

You really become part of Melba’s emotional state throughout it all, seeing her in every aspect of her fears, actions and their consequences. You’ll experience her anger, her struggles and her doubts.  You’ll also see her perspective on what racism is to her, even the not-so-obvious subtleties that she experienced and you too, will become enraged by the idiocy of humans.

If you enjoy reading about history, you’ll like this book, especially in the powerful way it gives a dark view into US history.  It’ll teach you to appreciate the freedoms that exist today thanks to those who gave so much, endured so much back then so we could benefit from what their hardships gave us as a result.

As for the spiritual benefits, you’ll enjoy reading how Melba’s faith in God made her capable of surviving this challenge, and made it possible for her to forgive those who had persecuted her.  So with history, spiritual embodiment, you also have a story about forgiveness and rising above a past of hate and sadness.  You’ll even get pointers on how to deal with bullies.

On the more technical side, the story seemed to jump around a lot in the beginning.  However, we are addressing a memoir here and often this does happen.  You’re not meant to agree or disagree with the actions of the MC, you’re just meant to bear witness and watch the unfolding events described.

This book is full of courage! It will not be an easy read.  All emotions you have will become engaged.

“Grandma India”, had a great influence on her in her early years and that support and wisdom has stayed with her to this day. Melba summarizes each chapter eloquently and I just can’t say enough about this book.

Overall, I gave it:

2 thoughts on “I WILL NOT FEAR: MY STORY OF A LIFETIME OF BUILDING FAITH UNDER FIRE, by Melba Pattillo Beals, Fleming H. Revell Company”