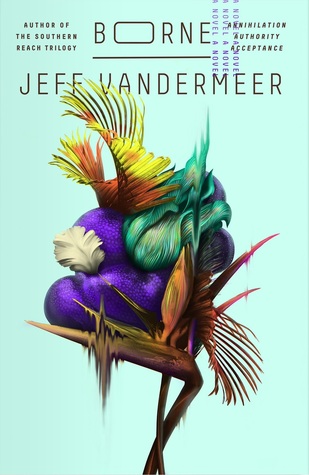 In a ruined, nameless city of the future, a woman named Rachel, who makes her living as a scavenger, finds a creature she names “Borne” entangled in the fur of Mord, a gigantic, despotic bear. Mord once prowled the corridors of the biotech organization known as the Company, which lies at the outskirts of the city, until he was experimented on, grew large, learned to fly and broke free. Driven insane by his torture at the Company, Mord terrorizes the city even as he provides sustenance for scavengers like Rachel.

At first, Borne looks like nothing at all—just a green lump that might be a Company discard. The Company, although severely damaged, is rumoured to still make creatures and send them to distant places that have not yet suffered Collapse.

Borne somehow reminds Rachel of the island nation of her birth, now long lost to rising seas. She feels an attachment she resents; attachments are traps, and in this world any weakness can kill you. Yet when she takes Borne to her subterranean sanctuary, the Balcony Cliffs, Rachel convinces her lover, Wick, not to render Borne down to raw genetic material for the drugs he sells—she cannot break that bond.

Wick is a special kind of supplier, because the drug dealers in the city don’t sell the usual things. They sell tiny creatures that can be swallowed or stuck in the ear, and that release powerful memories of other people’s happier times or pull out forgotten memories from the user’s own mind—or just produce beautiful visions that provide escape from the barren, craterous landscapes of the city.

A once surreal, futuristic world now bleak and ruined, good only for scavenging (our future?), is the home of our three main characters, including Borne.  A Company thought gone, but not, and a huge bear with an attitude for destruction and rage.

I was sold on this book when I first heard it was coming out.  My only fear was that, like many books that have disappointed me, I was listening to the marketing and hype.  So I asked and asked for the book, looked everywhere for it and couldn’t seem to get my hands on it. It came out in stores and I juggled the idea of whether to buy it or not, sight unseen…

Then, the publisher graciously sent it to me, signed bookmark included!!!!!! It was wonderful! I did a happy dance. So here the book was resting gently in my hands.  I ran my fingers over the gorgeous cover, petting the darn thing like it was a newly found kitten. I felt like an idiot.

I kept the book on my shelf, staring at the lovely colours and wondering if the rest of the book’s shelf existence could just be this, me gawking wistfully, it sitting gloriously. Day by day, it sat <sighs>.  Finally, I reminded myself that the publisher was waiting on a review… oh no, THAT… inevitable review where all my hopes and dreams could be shattered just from me opening the book and reading from the beginning. It was time to pick up the book (pet the cover some more), open it, and actually READ the darn thing. I was nervous.

My palms were sweaty. I touched my forehead and when I examined my fingertips, they too were covered with perspiration (ladies don’t SWEAT). It was the moment of truth, but I just couldn’t make myself open the cover. So I flipped the book over and read the back jacket again.   It was exactly as I remembered it, I thought with joy while hugging the book to my chest.

But, I had a responsibility… With a stupid Cheshire cat grin on my face, listening to my dog farting at my feet, I turned the book over and with great care, opened the cover.

IT WAS FANTASTIC! OMG!

One thought on “BORNE, by Jeff Vandermeer, Farrar, Straus & Giroux”