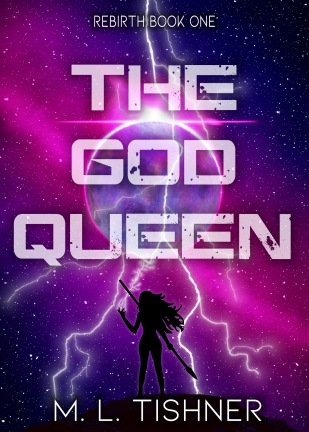 The return of the God Queen is not what everyone hoped…

Humans have long since spread their numbers among the stars. Now far, far into the future, war has torn the Tyre Star Cluster into two major political factions. The militant Dominion have gained the upper hand in the last decade with the murder of Niklaryn Ettowa, the progressive Federation’s champion. Some considered the war to be almost won.

Yet there are those who claim the war will not be ended by mortals…but by the rebirth of the gods.

Rei lived most of her life bartending on one Earth’s backwater towns. She daydreams of something more, traveling the stars, and destroying the man who murdered her brother Niklaryn. Her dream is within her grasp only if she accepts her fate as the God Queen.

Bronx is disillusioned with being a reincarnated god, let alone a reaper. He pays his penance by isolating himself and taking up the mantle of a combat medic. When the sister of his old mentor Niklaryn storms in to join the cause will he find something worth fighting for?

Together with others, they must help the Federation tip the scales in their favor, but clashing plans for the gods threatens to tear it all apart.

Jupiter Ascending meets X-Men in this epic New Adult space opera bursting with star-crossed romance, elemental magic, and an adventure across the star cluster, perfect for fans of A Spark of White Fire.

Part One: I found as I started reading that it appeared to have had multiple sections taken out leaving the character development lacking, or incomplete. I’m not sure if the removal was because someone told the author that the book was too long and should be reduced, or, if the author just didn’t like something for whatever reasons and took them out. I wish she had left them in or fixed part one more. Either way, plot holes were created. The plot holes not only affected the character development but also the pacing of this part.

Therefore, for me, part one is jumpy and hard to follow in places.  The saving grace for this section is the author’s writing. Tishner can handle herself well when given half the chance. There are flickers of great skill shown in part one. Sadly, much is hampered by the aforementioned.

Now, you’re talking. Nothing seems missing in this section and in fact, it reads well, paces perfectly and the characters seem whole and developed nicely. Love the entire concept of the story; the plot twists and turns nicely and there are no holes to get tripped up in. The relationships between characters is well-written and engaging. Tishner’s true talent shines in this section which makes me believe even more that something is missing in the first section.

The protagonist moves toward her goals with the enticing help of secondary characters which are placed properly and contributing to the story-line as they should. There is a nice tension building as the story unfolds. This is a character driven story and ends perfectly with all bits and pieces coming together. I can see this becoming a series if the author so choses. Despite the few glitches, I did enjoy reading this book.