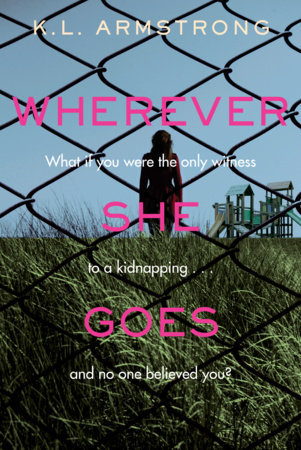 When it’s your word against everyone else’s–what do you do?

Bree Finch has fallen on some troubled times: her marriage has ended, she’s separated from her young daughter, Charlotte, and she’s haunted by a past she can’t escape. Routine helps, and every afternoon, during her lunch break, Bree goes for a jog in the park near her office. It’s the same every day: the same route, the same mothers with their children, the same people walking their dogs.

One day, during her jog, she spots a young boy a bit older than Charlotte, a boy she saw just the day before with his mother. But his mother is nowhere to be seen now. Nervous, Bree watches the boy as he wanders into the parking lot. And then she watches as a man grabs the boy, forcing him into an SVU. She watches as the boy cries and screams for his mother. She watches as the man slams the door shut, revs the engine and takes off.

She runs after them into traffic, and tries to take a photo, but can’t. The SVU is gone.

Bree can’t deny what she’s seen, and she can’t get the little boy or his screams out of her head. But, she’s the only one who believes that she witnessed the kidnapping of a child. No one else at the park saw the boy or someone snatching him, and she can’t give a detailed description of the child. The police don’t believe her, nor does her estranged husband, with whom she has a tense and complicated relationship. Instead, they begin asking Bree the questions: Why is she always alone in the park? Why does she spend so much time there? Does she realize that she makes the other mothers nervous, with the way she watches them and their children?

Then, days later, a woman is murdered–and Bree is the first person the police talk to.

Not because they think she may have witnessed something.

Not because they believe her about the kidnapped boy.

Because she’s their main suspect.

Ms. Armstrong has been writing books for some time now, so she’s no slouch when it comes to the proper structure of a novel. I’ve enjoyed many of her urban fantasy novels and her paranormal thrillers.

This is a thriller, fast-paced, edge of your seat dynamo guaranteed to take you on a thrilling ride of nerves and suspense. It’s a story enhanced overall with brilliantly developed characters flawed and multi-layered, constantly evolving and shifting to keep you guessing to the bitter end.

Her ability to take a common theme and change it up to put an original spin on something done many times over is something I enjoy about Armstrong’s work.