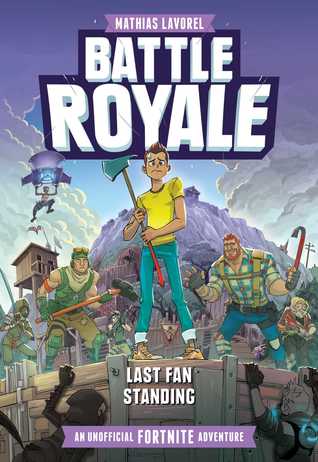 Take the Fortnite frenzy off the screen with this illustrated novel inspired by the wildly popular video game.

Paul’s a normal teenager: he likes sports, junk food, and action movies—he even wants to be in one someday. But what seems like Paul’s big break, his very first acting role, quickly takes a turn for the worse. One minute he’s on a festive bus heading for a new life of stardom, and the next, he’s hurtling toward the ground and certain death. Though saved at the last minute by an unexplained parachute, things don’t get any easier when Paul lands: he’s lost on an unknown island, he’s unable to speak, and every time he sees someone else, he hears strange noises and then blacks out . . . before falling from the sky again. But when a girl inexplicably saves him (and spray paints him) instead of attacking, Paul starts to learn the survival basics. Bit by bit, he must explore his surroundings, build structures, evade violent storms, unlock the mysteries of his strange island prison, and maybe—just maybe—find a way out.

So I love these books. Books written by Dustin Brady, Davidson, Cube Kid, all are exciting easy reads for tweens, both boys and girls. They’re fun, full of adventure, funny dialogue and character interactions and accompanied by great illustrations.

I think depending on the reader, spending time with this book and a parent is always a good way to encourage reluctant readers, while at the same time enriching parent/child quality time together. This is the scenario I’d place this book in.

Giving it to tween gamers may prove a greater challenge as I’m sure they’d get bored quickly with it.

For every book, there’s a reader. They just have to find each other.