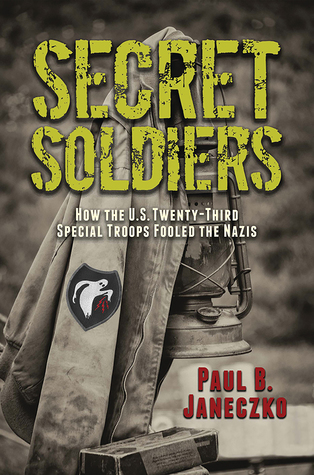 What do set design, sound effects, and showmanship have to do with winning World War II? Meet the Ghost Army that played a surprising role in helping to deceive — and defeat — the Nazis.

In his third book about deception during war, Paul B. Janeczko focuses his lens on World War II and the operations carried out by the Twenty-Third Headquarters Special Troops, aka the Ghost Army. This remarkable unit included actors, camouflage experts, sound engineers, painters, and set designers who used their skills to secretly and systematically replace fighting units — fooling the Nazi army into believing what their eyes and ears told them, even though the sights and sounds of tanks and war machines and troops were entirely fabricated. Follow the Twenty-Third into Europe as they play a dangerous game of enticing the German army into making battlefield mistakes by using sonic deceptions, inflatable tanks, pyrotechnics, and camouflage in more than twenty operations. From the Normandy invasion to the crossing of the Rhine River, the men of the Ghost Army — several of whom went on to become famous artists and designers after the war — played an improbable role in the Allied victory.

What can I say. Brilliant, fantastic story, incredible account of things I didn’t know about. Geniuses! I’m so glad I had the opportunity to read about a time my father was actively involved in.

The author lays everything out perfectly with supporting photos/illustrations to aid in the story-telling. This is a page-turner for those interested in history and specifically interested in World War II.

My father wouldn’t talk too much about the war, but the bits and pieces he did choose to share were remarkable. This book gives insight into the means taken for operations to foil the Nazis carried out by special troops comprised of actors, technicians, props, set designers, etc.  Who would have thought. Absolutely brilliant!