Moss has grown up on the strangest and most magical of islands. Her father has a plan to control the tempestuous weather that wracks the shores. But the island seems to have a plan of its own once Callan — a wild boy her age — appears on its beaches. Her complex feelings for Callan shift with every tide, while her love for the island, and her father, are thrown into doubt…

And when one fateful day, a young man from the outside world washes up on the beach, speaking of the Old World, nothing will ever be the same. 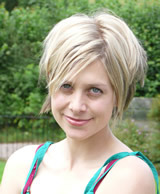 Lucy Christopher was born in Wales but grew up in Australia. She obtained an Undergraduate degree at Melbourne University. She moved to the UK to earn a distinction in a Creative Writing MA from Bath Spa University. The novel she wrote for this class, The Long Flight, was picked up by a publisher under a new name of FLYAWAY.

Lucy’s debut novel, Stolen, was written as part for her PhD degree. Stolen explores her thoughts on the Australian desert through the story about a teenage girl who is kidnapped and taken there.

Lucy is working on another teen novel. When she is not writing, Lucy spends her time daydreaming, emailing friends and horseback riding a mare named Topaz as well as helping to run a kid’s wildlife group at Newport Wetlands.

I received this ARC in exchange for my honest review.

I absolutely love the simplistic yet gorgeous cover design. I hope it remains the final choice as I’ve only received an uncorrected proof copy.

Oh boy oh boy… what a hot mess. What happened? The award-winning author has put out far better books than this.  I was so disappointed.  There was trouble with plot, pacing, and the ending… WHAAAAAAAAT???

Her book, “Stolen,” was far better and better written. She won  the Printz Honor for it.  So when I went in to this one, I was expecting the same fantastic writing.  The premise was there, the potential was there and the talent was there as well… just not shown in this book.

The plot, the plot, the plot… someone call in the marines! We’ve lost the plot somewhere between hokey and smoky and can’t find it… in fact, I think it never was.  As the story meanders along, I couldn’t help but hear a faint rendition of “Tip To Through The Tulips” in the background.  Seriously, a mess of no plot, no character driven story, no… anything but a haze blue fog and what strikes me as incomplete thoughts and directions filled with misguided implications of magical realism aimed at kids.  You’re dumped right into Moss’s world with not so much as a howdy do, which is unusual for fantasy novels. There’s no real backstory, no world-building…

I just wasn’t riveted to the pages, but more like nodding off on top of them.  It would be great to see that same talent I saw in “Stolen” again, and although I’m not ready to say I’m finished with this author, I am seriously questioning if I should read any more of her work based on what she’s done here.