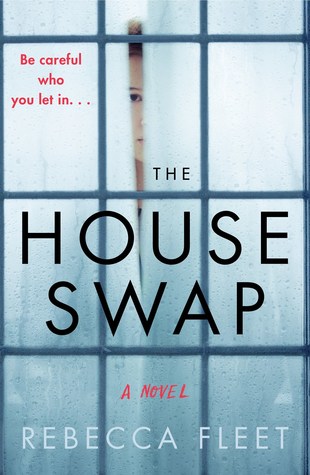 When Caroline and Francis receive an offer to house swap–from their city flat to a townhouse in a leafy, upscale London suburb–they jump at the chance for a week away from home, their son, and the tensions that have pushed their marriage to the brink.

As the couple settles in, the old problems that permeate their marriage–his unhealthy behaviors, her indiscretions–start bubbling to the surface. But while they attempt to mend their relationship, their neighbor, an intense young woman, is showing a little too much interest in their activities.

Meanwhile, Caroline slowly begins to uncover some signs of life in the stark house–signs of her life. The flowers in the bathroom or the music might seem innocent to anyone else–but to her they are clues. It seems the person they have swapped with is someone who knows her, someone who knows the secrets she’s desperate to forget…

Okay, I’m not going to be very popular for what I’m about to say, but here goes…

I know others have stated that this story was slow to build tension and conflict.  That’s putting it mildly… it was painfully blah.  This is NOT a thriller, but rather a suspense, if that.  Typically, it’s about a woman and a man who fall apart and away from their marriage.  One goes one way, the other has an affair. <Yawn> So you have addiction and then you have infidelity. <Yawn>

To fix this disaster of life, they swap houses with a virtual stranger… ya, that’ll do it.  If everything is going to crap, let’s swap houses and fix our marriage by staying in a stranger’s spooky home.  Seriously?

Sadly in this day of dysfunctional relationships, addictions and cheating, how could any of this be exciting?  I can turn on the news and get the same stuff. So in my mind, the concept purely sucked.

The saving grace, however, was the author’s voice.  She steadily wove her tale, bringing you into the character’s nightmare showing past and present situations that build toward the final quarter of the book where the story picks up the pace (finally!!!) and tension is built, then BOOOM! It’s over.

Basically, if the author wrote this way throughout the entire book, I would have another review summary to write.