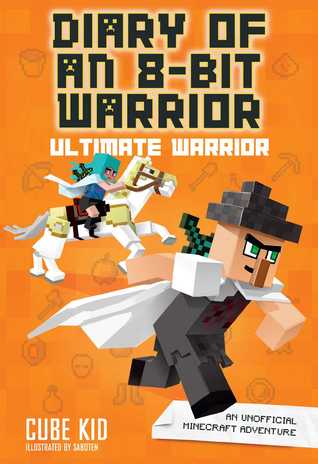 Minecraft meets Diary of a Wimpy Kid in book 5 of the very popular 8-Bit Warrior series of the journal of a young Minecraft villager who dares to dream of becoming a Minecraft warrior!

In the fifth in this series of five unofficial Minecraft adventure books, it’s time for our 12-year-old hero to taking his warrior training to a whole new level of ultimate warrior!

So… lol This is a different book from most graphic novels/comics I’ve reviewed… I have to say that Minecraft does have a very distinctive following somewhat like the “Simpsons” had years ago.  Hopefully, these new characters will do as well as the “Simpsons.”

I think Runt is the cutest! His character is so great and he does try lol.  A knowledge of the game is really a good idea for things to make better sense.  However, I did share this book with a group of ten year olds (5) at the library and asked them their opinions.

As they each took turns reading this book, I watched how engaged they were.  Their faces were buried in the book for most of the time.  Occasionally, they’d discuss something they were reading with the person next to them and then both would break out laughing, only to be shushed by the librarian.  Only one didn’t seem to enjoy it as much as the others and when I later asked him why, he said, “It didn’t make sense.”  Of course, his statement was met with jeers and protests lol. But, hey… everyone has their own opinions.  I asked him if he ever played Minecraft and he said, “no.”

Besides the story, I asked them what they thought or liked about the book, what stood out. Some said the art and others said how the pages are laid out. The story, they felt, (with the exception of one lad), was fun and interesting enough to keep them interested.

I asked if they’d continue the story and all said they would like to, even confused boy, who immediately said he’d play Minecraft to learn more about the characters… me too!