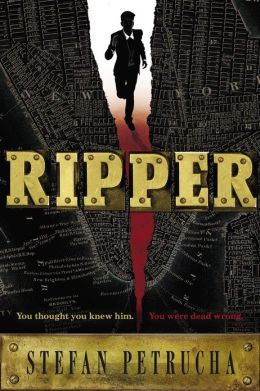 There is a killer loose in New York City, and Carver Young is the only one who sees the startling connection between the recent string of murders and the most famous serial killer in history: Jack The Ripper. Time is winding down until the killer claims another victim; but Carver soon sees that, to the Ripper, this is all a game that he may be destined to lose.

What a fantastic book! This is a middle grade, fantasy thriller. I’m sure you can tell by the title that Jack the Ripper plays a significant part in the overall theme.  The cover is beautiful and is 416 pages long, with some back matter from the author that is really interesting too.

The Protagonist is a fourteen year orphan named, Carver Young. He and two others at an orphanage, find out that they are too old to remain under the care of the orphanage manager, and must find other accommodations. So to help out, the head of the orphanage has an adoption night where adults come in to meet children and possibly adopt one.  The three main characters find homes, each unusual and unique, with the Protagonist finding his in the strangest way.

There’s an element of detective work, references to Sherlock Holmes and tie-ins to puzzle solving. A distinctive separation of society classes is shown throughout the plot.

The story itself takes place in the late 1800s in New York City during the time following the Ripper murders in London, the immigration swell through Ellis Isle, and towards the end of horse and carriage modes of transportation.  The Industrial Revolution was around the corner.

This story presents a very interesting twist to a well known plot. Carver’s past is unknown when the story begins until he breaks into the orphanage offices to discover whatever he can that may or may not be contained in his file locked away.

His friend Delia, and his nemesis, Finn offer excellent secondary character support for the Protagonist. Both relationships between the secondary characters and the Protagonist develop nicely throughout the story to a heart-warming finish. I like all the characters presented and think each character arc is driven carefully forward at the right speed to an excellent conclusion. The Protagonist is realistic and developed with a multi-layered personality shown expertly during any interaction he has with others throughout the story. He begins as a boy, then finishes as a young man, street-wise, clever and very resourceful.

The only mistake I saw was at the end (spoiler) when the author must have felt fourteen year olds couldn’t run the New Pinkerton Agency. In my opinion, he should have written them doing just that. What a great series that would make, especially with the addition of Delia and Finn’s characters helping him.

The Antagonist was cleverly woven into the story and did not fail to achieve the surprise ending that the author obviously hoped for. I was very impressed with this story. Kudos to Stefan Petrucha for successfully drawing me into the world of Carver Young!

I give this book: