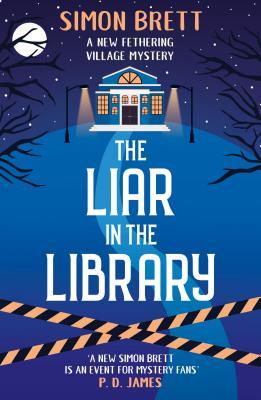 When an author event at the local library ends in murder, Jude finds herself a suspect in the waspishly witty new Fethering mystery.

Having been booked to give a talk at Fethering Library, successful author Burton St Clair invites his old friend Jude to come along. Although they haven?t met for twenty years, Jude is not surprised to find that St Clair hasn?t changed, with his towering ego and somewhat shaky relationship with the truth. What Jude hadn?t been suspecting however was that the evening would end in sudden, violent death.

More worrying, from Jude?s point of view, is the fact that the investigating police officers seem to be convinced that she herself was responsible for the crime. With the evidence stacking up against her, Jude enlists the help of her neighbour Carole not just to solve the murder but to prevent herself from being arrested for committing it.

This is the first introduction to this series for me. Being number eighteen in the series I thought the writing skill and premise should be set and improved with each book. The book is put together well, it’s a cozy mystery and the premise surrounds a library setting element, there are interesting characters that may have been more interesting to me if I had read any of the first seventeen books of the series.

Sometimes, I’ve found with series that have this many books to them they tend to run out of gas as the series progresses past book number ten. Even then, I’ve seen the same thing in some cozy mystery series run out of gas after book five.

I think this may be the case for this series. It’ll show in the next book, if true. I’d love to be wrong in this case. Since I didn’t read the others, it could very well be just this book.

A pleasant read, interesting characters full of quirks and humor. Great setting, if you’re a book nut like me, paced well, a bit meandering but tolerable. Overall, an enjoyable read with a bit of a surprise here and there, nothing hugely substantial. If you want to give your brain a break from stress, this would be a good book to get into.