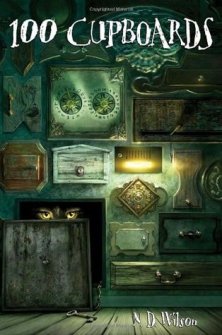 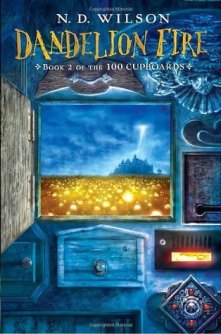 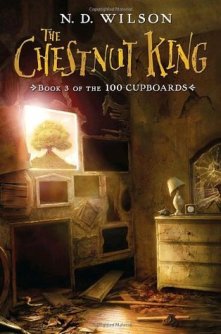 100 Cupboards is a 2007 fantasy children’s book by N. D. Wilson. The first book in the 100 Cupboards Trilogy, it is followed by Dandelion Fire and The Chestnut King.

Readers who love Percy Jackson, the Unwanteds, and Beyonders will discover that 100 cupboards mean 100 opportunities for adventure! The bestselling and highly acclaimed 100 Cupboards series starts here.

What dangers are locked behind the cupboard doors? Henry isn’t brave, but when he hears a thumping and scratching on the other side of his bedroom wall, he can’t ignore it. He scrapes off the plaster and discovers mysterious doors—cupboards of all different shapes and sizes. Through one he sees a glowing room and a man strolling back and forth. Through another he sees only darkness and feels the cold sense that something isn’t right. When his cousin Henrietta boldly travels into the worlds beyond the cupboards, it’s up to Henry to follow her. Now that he’s opened the doors, can he keep the evil inside from coming through?

I found this series after having it recommended to me by a client.  I am now going to give my honest review.

The whole concept of tiny cupboards on a wall, each leading to a different world was incredibly fascinating to me.  I loved it.  The covers added to my intrigue.  Seeing a pair of yellow eyes peeking over a dark cupboard door drew me in.

I absolutely loved the young characters in this series.  The stories revolve around a young boy, Henry York, his cousin, Henrietta, a new friend and a slew of strange fairies with an odd society, rules and political structure.

The author’s voice kept the story going.  An excellent story-teller with a huge imagination, he takes you step by step into an incredible variety of worlds and situations that all come together in the final book.

The first book introduces you to Henry and his relatives and the mystery surrounding their grandfather and his secret. Before you know it, you’re transported into a wonderful world accessed through cupboards, each taking you to a different place.  You learn about an evil witch and her gross evil-doers.

The second book, takes you into a history of this newly found strange world. Henry discovers more and more about himself. He uncovers who he is and who his uncle is.  He learns more about the off-world and his shrouded powers.

The third book, brings you more into the world of fairies, new friendships, answers to nagging questions and a further development of Henry’s character. As the characters develop, they all grow, each layer unfolding to the next. The off-world begins to affect Henry’s earth world and soon the two are tied together forever.  Henry faces a huge decision he has to make, loses someone he loves dearly and learns more and more about who he is. His friends grow closer, the ties they’ve formed binding them together forever.

Overall, I loved the flow of this series, each book set up the next perfectly.  Each added to the one before and continued with a solid plotline. I really loved the characters in the series the most.  I wish the author had focused more on the different lands, just because he spoiled me with what he did offer–I wanted more.

The only thing I didn’t like was how the second book dragged at certain places.  This was unfortunate, but not unheard of in a trilogy.  I feel, as a series’ author, that the second book is often the hardest to write. You want to answer any unanswered questions left over from the first book, set up the third book by the second book’s end, which was done successfully, but you also need to continue adding to the story by building tension.  It’s a tough demand and sometimes authors struggle with this part.

Wilson did rather well with the second book. What develops is written with clever exposure making you want to find out the ramifications caused by Henry’s choices.  I would want his powers; they’re really cool.  His relationship with his Uncle is endearing and I liked Henry’s uncle.  In fact, I liked them all, even the witch.

I gave this series: