Life just got a little sweeter in the island fishing village of Eastport, Maine. Jacobia “Jake” Tiptree and her best friend Ellie are opening a waterfront bake shop, The Chocolate Moose, where their tasty treats pair perfectly with the salty ocean breeze. But while Jake has moved on from fixing up houses, she still can’t resist the urge to snoop into the occasional murder.

Jake and Ellie have been through a lot together, from home repair to homicide investigation. So when they decide to open a chocolate-themed bakery, they figure it’ll be a piece of cake. With Ellie’s old family recipes luring in customers, they expect to make plenty of dough this Fourth of July weekend. Having family home for the holiday only sweetens the deal for Jake—until the ill wind of an early-season hurricane blows up her plans. When the storm hits, Jake’s grown son Sam is stranded in a Boston bus station, and her husband Wade is stuck on a cargo ship. But as bitter as the storm is, something even more sinister is brewing in the kitchen of The Chocolate Moose—where health inspector Matt Muldoon is found murdered.

Ellie never made a secret of her distaste for Matt, who had been raining on their parade with bogus talk of health code violations. Now, with no alibi for the night of the murder, she’s in a sticky situation with the police—and it’s up to Jake to catch the real killer and keep Ellie living in the land of the free. 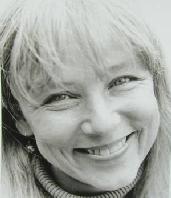 Sarah Graves lives with her husband John, a musician and luthier, and their black Labrador Retriever in a house very much like the one Jacobia Tiptree is remodeling in Eastport, Maine. When she’s not writing Jake’s adventures, Sarah works with her husband on the house and she plays the 5-string banjo.

Although this is supposed to be book one of a new series, I found myself reading references to other books of another series.  This was very frustrating and confusing.  I know this was supposed to be a cozy mystery, but there were some really strange elements to the plot.  The fact that the Protagonist had no boundaries or fear of being harmed, really didn’t seem realistic to me.  It made the main character’s actions hard to like or believe for someone like me who didn’t have the satisfaction of reading more about her character development in another series. This left many holes in the entire section of character development for all the characters of this book, who participated in the previous series.

The other problem I had with this story was how useless the police seemed and especially how incompetent the author wrote them. Again, this didn’t seem very realistic. The whole part of the cooking/baking throughout the book didn’t bother me really, and in fact, reminded me of the cozy bake mysteries I’ve seen aired on television that center around a bakeshop/restaurant.  The only difference, the book focused a lot more on baking.

All the zany incidents that occurred one after the other kept the story moving forward, almost in a whirlwind frenzy and this could have been done with less chaos and more lead-in. The ending popped up before I knew it and I was left breathless from the craziness of the writing and the story, not to mention from the smell of chocolate, recipe included…

I think less speed and more quality of writing this author is known for would have been preferred. But I did finish the book, it was mildly enjoyable, and I gave it: