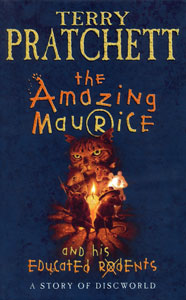 Carnegie Medal Winner * New York Public Library Books for the Teen Age * VOYA Best Science Fiction, Fantasy, and Horror * ALA Best Fiction for Young Adults * Book Sense Pick.
The Amazing Maurice runs the perfect Pied Piper scam. This streetwise alley cat knows the value of cold, hard cash and can talk his way into and out of anything. But when Maurice and his cohorts decide to con the town of Bad Blinitz, it will take more than fast talking to survive the danger that awaits.
For this is a town where food is scarce and rats are hated, where cellars are lined with deadly traps, and where a terrifying evil lurks beneath the hunger-stricken streets….
Set in Terry Pratchett’s beloved Discworld, this masterfully crafted, gripping read is both compelling and funny. When one of the world’s most acclaimed fantasy writers turns a classic fairy tale on its head, no one will ever look at the Pied Piper—or rats—the same way again!

I loved this book.  The 28th book in the Discworld series but his first written for children. A wonderful fantasy story with quirky and lively characters.  This book was interesting and should be read by everyone because of his expertly penned animals that could talk and their interactions with human characters.

Discworld was a notable comic fantasy series up to the point of this book, which differs from the rest of the series by surprisingly being divided by chapters.  Back in the day when Pratchett began this series in 1983, the target audience was actually young adult when there really wasn’t a clear definition of a YA genre.  Since this was the first of the series to use chapters, it set the precedent for others to follow in the series, such as The Wee Free Men.

The plot is ingenious and a clever remake on the old fairy tale, The Pied Piper. There’s a nasty town with a rat problem, a super rat king with mental powers, fighting rings, a young lad, a girl, a group of intelligent and talented rodents with wonderful names such as Dangerous Beans, and of course, Maurice.

The Protagonist is Maurice who challenges the super rat king, death, and other rats not so nice, not to mention rather devious rat catchers. Maurice begins as a selfish, self-centered egotist and gradually moves to becoming a more selfless, compassionate egotist.

The book is funny and quirky, and I couldn’t stop reading it. A classic example on how to write a wonderful story about animals that exhibit human-like characteristics, including the ability to talk, feel and hurt. It’s a great adventure filled with twists and turns and scary bits that will hold the reader to the very end of the book. Excellent read for a YA audience as well as a tween age readership.

I give this classic: